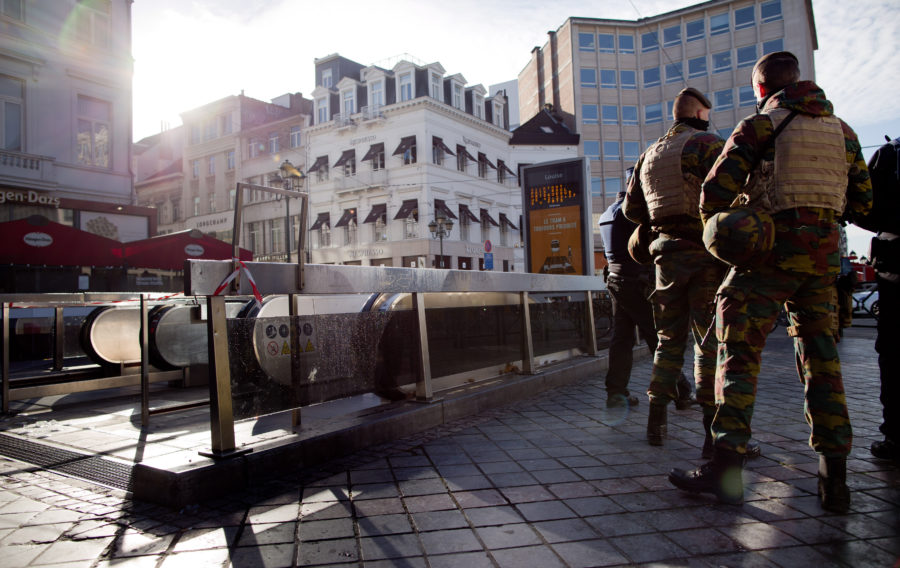 Martin Cronin, CEO of Patriot One, is an expert in counter-terrorism, conflict resolution, and government/corporate interface. Before moving to the private sector, he was British Consul-General to Western Canada, based in Vancouver. His career includes over twenty years of experience in the field of international diplomacy with the British Government, including postings in Yemen, Jordan, Sweden, Pakistan and Iraq. Here, he considers the changing face of terror and the many ways in which counter-terrorism must now keep pace.

Law enforcement agencies all over the world are on constant alert. They carry the heavy burden of responsibility for safeguarding a vulnerable, anxious public and must continually monitor for threats to domestic and international security. An all-encompassing approach to threat detection and defence is crucial.

Detection techniques include the surveillance of high-risk individuals, close monitoring of travel patterns, online activity, association with known extremists. Defence methods can be more physical and cumbersome, an example is the extensive security checks in airports – a long and invasive gauntlet: jackets off, water bottles jettisoned, tweezers – tweezers! – banned.

The new face of global terror

Terror threats manifest themselves in different forms. For example, terrorist cells – sprawling, complex webs comprised of shadowy figures intent on spreading panic, fear and destruction through acts of extreme violence, generally on a large and public scale. Larger attacks such as these tend to require months of planning, extensive communications and cross-border money transfers, all of which leave a trail that can make it possible for security agencies to uncover plots.

Increasingly, however, the global threat is taking on a new form. There is a growing and worrying trend towards attacks from lone agents. Unlike larger attacks, these small-scale attacks by lone agents can be far more difficult to detect and disrupt as they don’t necessarily require advance planning or assistance from outside groups like ISIS. All it takes is for one radicalised individual to make a snap decision, arm themselves with a weapon and launch an attack.

Counter terror experts are adept at preventing large-scale, complex attacks but lone actor attacks can be just as destructive and are far harder to anticipate and disrupt.

The UK has been unfortunate enough to witness first-hand just how devastating the consequences of lone actor attacks can be. Perhaps the most haunting of these attacks was in Manchester in May 2017, when a suicide bomber entered Manchester Arena as music fans were pouring out of the venue and detonated a bomb, tragically killing 22 people, including children, and injuring many more.

There is also rising concern about lone actor attacks in schools. The problem is particularly acute in the US, where there has been an average of one school shooting a week so far in 2018. No matter what the motivation behind an attack, the effect is still the same.

Venues like these are soft targets that tend not to have extensive security systems in place. They undoubtedly need protecting, but we do not want to live in a world where children are educated in fortresses or where crowds stand for hours outside music concerts being manually scanned and searched. Now more than ever, the world needs low- profile, non-intrusive security systems that can be deployed across a range of environments.

The UK invests heavily in public security and has led the way on camera surveillance. Cameras are used throughout the Underground system as a way to monitor activity without the deployment of fixed security systems that would undoubtedly cause gridlock. While camera surveillance can be an invaluable way to obtain intelligence, it is predominantly a retrospective measure that may do little to pre-emptively identify threats.

Arguably, current security measures are either retrospective or cumbersome. Take security checkpoints, for example, that tend to be congested and inefficient. Furthermore, the checkpoints themselves can be at risk of becoming the focal point for attacks. Evidence of this is seen in places like Iraq, where a security checkpoint was again the recent target for a suicide bomber, killing eight people.

If the goal is to prevent future attacks, cameras and fortifications are unlikely to provide the whole answer. We exist in an era where a lone actor with a gun can wreak chaos in seconds. Governments are duty bound to move beyond over-fortification and embrace a new way to protect citizens. Now more than ever, a proactive approach to security is needed to keep the public safe.

When trying to create a benign environment, it is important that security systems are based on the discreet, unobtrusive disruption of threats. If the public is inconvenienced too much, then security will lose the goodwill of the public. Security systems should capitalise on the benefits of modern technology to be both proactive and reactive, ideally without posing any threat to a person’s privacy or civil rights.

The future of global security

In order to combat the threat posed by bad actors, public security demands a cost-effective, layered, multi-sensor approach that incorporates people, policy and platforms. A low-profile, integrated approach that taps into the experience of today’s security personnel, adoption of new policies and procedures, and implementation of new technology platforms, all to provide several points for threat detection.

In fact, new covert platform technologies now exist that allow for exactly this, when coupled with trained security staff and new procedural planning for lone actor attacks. In practice, each venue may take multiple different forms of technology solution depending on the environment that needs protection. For example, advancements in video systems enhanced by AI-powered object recognition software can be deployed today to identify and flag forbidden objects (i.e. guns and knives) in locations such as school entrances or train stations. A new solution using targeted magnetic sensors, which are easily concealable in planter boxes, can now scan individuals and their bags for large mass casualty threat objects, such as rifles and IEDs. And while passing through the entrance of a building, newly tested cognitive microwave radar systems can screen for concealed weapons catalogued in the system’s database of threat items – guns, knives, bombs and rifles.

Inside buildings, new threat detection technology solutions, such as explosive scanners for personal electronic devices and bottle liquids, can sit at the registration desk, ensuring no such threats exist in everyday objects, like laptop computers, tablets, mobile phones or bottled beverages.

All these technologies can then be integrated into a complete platform monitoring system that connects all threat solutions, which can be operated by the property’s security office.

Furthermore, Patriot One feels strongly that today’s security operators need to be trained on how to effectively implement these new technologies. New policies and procedures need to be put into place, hence this is part of the company’s service offering through its own team and key partners. The complexity of the security environment is enormous and only by adopting a multi-sensor approach can such a wide spectrum of threats be truly mitigated. There is not a ‘one size fits all’ solution, but rather a set of security systems that can be coupled together and matched with the environment they are protecting.

When adopting new security technologies, transparency and an appropriate regulatory context are the key to unlocking public trust. In order to do this, law enforcement agencies, government and industry must cooperate to cultivate the most effective measures.

Deter first, then detect and defend as necessary. That is the future of public security.

In The News 09/06/2022 Patriot One Releases Third Quarter 2022 Results More
In The News 26/05/2022 This Has to Stop - A note from our CEO More
In The News 03/05/2022 A Pragmatic Approach to Resolving Weapons in Subway Systems and Other Public Venues More
Coming soon
See all In The News
Historical Press Releases This website contains historical and archived press releases for Patriot One Technologies Inc. The information in these press releases is historical in nature, has not been updated, and is current only to the date indicated in the particular press release. This information may no longer be accurate and therefore you should not rely on the information contained in these press releases. To the extent permitted by law, Patriot One Technologies Inc., its employees, agents and consultants exclude all liability for any loss or damage arising from the use of or reliance on, any such information, whether or not caused by any negligent act or omission.