The Cincinnati Reds and the city of Cincinnati are deploying a “covert threat detection solution” that will be able to identify people carrying guns and knives without them knowing it, according to Patriot One Technologies. 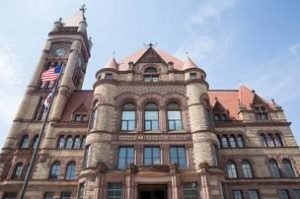 The Cincinnati Reds and the city of Cincinnati are deploying a “covert threat detection solution” that will be able to identify people carrying guns and knives without them knowing it, according to Patriot One Technologies.

The city plans to use Patriot One’s Patscan platform in certain city facilities that will not be disclosed. Patriot One is selling the technology to the city through Ginter Electrical.

“We’re excited to deliver our covert threat detection solution that is not only focused on saving lives but saving a way of life that the city’s employees, residents and visitors have come to expect,” Patriot One’s CEO Martin Cronin said.

The artificial-intelligence technology platform is already deployed by the Reds at Great American Ball Park, according to the company.

The system could allow people to pass through invisible checkpoints with everyday objects without being scanned or going through a metal detector. The sensors use biomagnetic resonance, cognitive microwave radar and video object recognition to detect weapons, including abnormal amounts of meal, which could detect an improvised explosive device.

The scanners do not gather personal information or produce body images in a way that an airport scanner does.

“Our philosophy of detection is that people should be able to go about their business unimpeded and not have to go through thick security checkpoints to be wanded, padded down, every time they go into a hotel or a shopping mall or anywhere where the public may be at risk of acts of violence,” Cronin told TechRepublic earlier this year.

“We know that people in Western societies don’t want to live in a mass surveillance state. What our sensors are looking for is the presence of a weapon.”

Casey Weldon, a spokesman for the city, said the system the city uses will detect guns and knives but the city won’t be disclosing which facilities it will be deployed in for security reasons.

“We pride ourselves on being a forward thinking, innovative Midwest city; always looking for ways to enrich our residents’ and visitors’ lives, while keeping them safe,” Interim City Manager Paula Boggs Muething said in a news release. “I am proud to be part of a nationwide group against gun violence, as we continue our own efforts to develop Cincinnati as a smart, safe city with safer, healthy communities. Bringing solutions like the Patscan Threat Detection Platform will help us achieve this goal.”