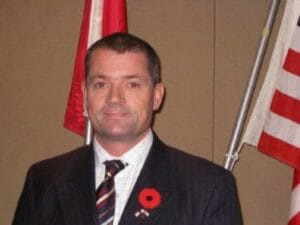 Data encryption makes sure your bank account information doesn’t get into anyone else’s hands. Drug testing makes sure that medicines that can heal you don’t make you sick. Sensors tell us if a bridge is about to fail.

The field of weapons detection may not be something you think about every day, but it could be about to go through a sea change that will result in much greater public safety.

A new company called Patriot One Technologies (TSXV:PAT) is the culmination of years of research supported by the Canadian government and NATO and tested at McMaster University. The result, a new kind of solution using cognitive microwave radar technology, has attracted a lot of interest, including that of former Homeland Security chief Tom Ridge, who recently joined the company’s advisory board.

Cantech Letter sat down with Patriot One Technologies’ CEO Martin Cronin to talk about the imminent commercialization of a disruptive new technology.

Martin, Patriot One Technologies is a company that has a relatively short corporate history, but the science behind your new device for concealed weapons detection has been rigorously tested and developed over the course of several years. Can you tell us about that?
That’s absolutely right. The science behind Patriot One is the product of many years of research by Dr Natalia Nikolova, Canada Research Chair in High-Frequency Electromagnetics. This research has been supported by both the Canadian Federal Government and NATO. Extensive testing has taken place in the laboratory at McMaster University, as well as in the field in Ukraine. What we are now commercialising at Patriot One is based on very robust science.

Traditional technologies are expensive, with low accuracy. They are highly visible and require both a human operator and subject compliance.

What’s the problem with traditional weapons detection?
Traditional technologies are expensive, with low accuracy. They are highly visible and require both a human operator and subject compliance. They are only relevant to specific environments and frankly criminals and terrorists are working around them. We offer a highly novel solution that doesn’t require a human operator or subject compliance. It can be deployed covertly, where appropriate, and is competitively priced for many different environments.

We mentioned that this cognitive microwave radar technology has been tested extensively. What kind of performance are you seeing?
We have tested extensively in the lab in conjunction with our law enforcement partners and initial testing with NATO in the Ukraine. Given the controlled nature of weapons we are working closely with strategic partners to continue to test the device. We are able to classify specific weapons in our database with a 90+ % accuracy rate.

As I write this there has been yet another mass shooting in the United States, this time in Fort Lauderdale. Do you think the time is coming when a solution to this problem will be demanded by the public?
I think that the public are already demanding solutions. The public in many parts of the world are in fear as they go about their everyday lives. But the answers have simply not been there. We believe that our technology can be one vital piece of a strategy to restore public safety.

There are many, many sectors where our technology has key application from hospitality to mass transportation, federal buildings to public schools and higher education establishments, shopping malls to prisons.

How would Patriot One’s technology have prevented the Fort Lauderdale tragedy?
We think that it would be unhelpful in the wake of a recent tragedy to make that kind of assessment. What we can say, moving forward is that our technology offers the promise of identifying threats before an attack is executed and we are confident that it will save lives.

Who will Patriot One sell to?
There are many, many sectors where our technology has key application from hospitality to mass transportation, federal buildings to public schools and higher education establishments, shopping malls to prisons. We are initially focused on strategic reference clients but we expect that a network of resellers will penetrate a very broad market at home and internationally.

What, do you think, is the size of the market? Is the U.S. the main focus, initially?
Given our assessment above, the traditional market sector data for metal detectors and other similar devices is really wholly inadequate to capture a sense of market size. Our initial focus will be on The United States and Canada but we have very strong pull from other international markets, particularly the United Kingdom and we have plans to scale rapidly to meet those expectations.

We have filed patents in multiple jurisdictions and we will vigorously defend them. Nevertheless there are also significant technical barriers to a competitor emerging in any short time frame.

What about competition? Are there any licensing rights or specific IP that would prevent others from marketing a product that uses microwave radar technology?
We have filed patents in multiple jurisdictions and we will vigorously defend them. Nevertheless there are also significant technical barriers to a competitor emerging in any short time frame. There are many years of highly complex, world class development behind our solutions.

Patriot One just added former Homeland Security chief Tom Ridge to its advisory board. How did this come about and what did Mr. Ridge see in the technology?
We were very fortunate to have Governor Ridge as keynote speaker at our launch event at the International Association of Chiefs of Police Conference in San Diego in October. Governor Ridge has shown great confidence in the game changing nature of our technology and our conversations since the launch have culminated in a strategic partnership with Ridge Global. This is something that we are very excited about.

What do you want to accomplish in the next 12 months?
We are very focused on delivering on the milestones that we have committed to with our investors, specifically executing on demos, and appropriate certification for our target markets. Major activities include our launch at ISC West in Las Vegas and then just getting units into the hands of our customers to meet the demand that is growing daily.

Disclosure: Patriot One Technologies is an annual sponsor of Cantech Letter.