As “soft targets” go, sports stadiums provide a particularly complex challenge to security professionals. They cater to tens of thousands of people at a time, have multiple points of entry and egress, large external areas where people congregate, and, of course, an interior where those thousands of people are packed together watching a game or concert.

Whether it’s a sports franchise or a concert promoter, the success of a stadium-based business relies on the ability to deliver a consistently good patron experience, which can be compromised by security incidents and the disruptions caused by security processes. And, if new security processes aren’t thought out and tested properly, they might solve one risk but create others. For example, metal detectors and pat downs might keep weapons out of the stadium, but they also create lines of people outside of the stadium, which can be an inviting target to terrorists and others seeking to cause mayhem. (Unfortunately, this scenario is not just conjecture − it has played out in actual stadium attacks, the bombings outside of Manchester Arena in England and the Stade de France in Paris being two of the most notable.)

The convergence of September 11-driven safety concerns for large-scale attacks, with the rise of social media and the proliferation of guns, has changed the stadium security game. The days of focusing almost exclusively on alcohol consumption and unruly fans are gone. Now security pros also have to protect against external threats and the issues that can arise around patrons carrying weapons.

All of this requires a new approach that takes into account security on the inside, at the gateway, outside and online. Fundamentally, there needs to be a new “security fabric” that can extend across all of these areas and adapt to an evolving threat landscape, while simultaneously preserving or enhancing the patron experience. 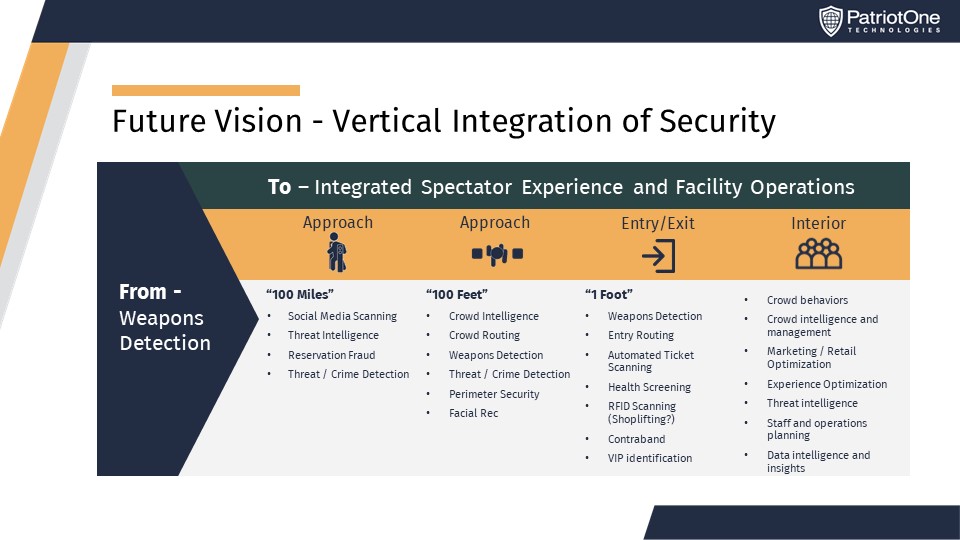 These new security requirements can’t be met with traditional manual approaches. Technology must be intelligently deployed to augment the existing security team and processes, and in some cases may require the development and refinement of new processes.

The common “thread” running across the security fabric is artificial intelligence (AI). AI can automate many of the new security requirements and inform security strategy and operations, while also reducing the overall impact of security processes on the patron experience. Some examples of how this is being done today include:

AI is not a “silver bullet” for securing stadiums. However, it can be a powerful tool augmenting existing security capabilities, and uniting security operations under a single fabric. And, as we all know, a fabric is made up of individual threads, woven together to create a coherent whole. For modern stadium security requirements, AI can be the threads that tie together security strategy with tactical execution and operations, to deliver the patron experience everyone hopes to have, and the secure experience everyone needs.

More articles related to this topic:

Crowds queue up, six feet apart, pumped that the stadiums are reopening. You hear the shouts of the fans, only slightly muffled by the masks – it’s a different situation, stadiums are not without the scars of Covid-19.  To accommodate the changes in behavior, security operations will have to tailor certain tasks, like patron screening, … Continued
Learn More
Policy

AI-Enabled Security Tech: How It Can Impact All Areas of your Business (Part II)

The high level of interdependence between different business functions has meant that some business units now impact the bottom line in ways much more than they used to. The success of departments that may have been previously viewed as mere support functions are now measured by risks mitigated, revenues earned or costs directly impacted. While … Continued
Learn More
Policy

An open letter to President Biden

Mr. Joseph Biden President of the United States The White House 1600 Pennsylvania Avenue, N.W. Washington, DC 20500 Dear President Biden, Your recent six executive orders addressing gun reforms are a step in the right direction, but you and I both know they do not even begin to address the gun violence crisis gripping the … Continued
Learn More
Many of the articles within the media pages of the patriot1tech.com website are 3rd party in origin and have been included for informative purposes only. Decisions to include articles are solely based on the timely nature of the storyline as it applies to the security industry in general and to the proliferation of threats to public safety in particular. The inclusion of these articles does not imply that PATRIOT ONE its management, agents or employees endorses any statements expressed. The public is advised to fully investigate any contentious claims or assertions prior to arriving at any conclusions. Any hyperlinks included in these articles does not imply that PATRIOT ONE monitors or endorses these websites. Accordingly, PATRIOT ONE accepts no responsibility for such websites. Additional information regarding exclusions and liability limitations are outlined here.